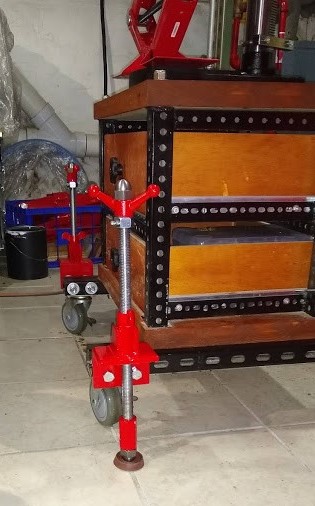 By way of introduction, I have a nearly ten-year-old Craftsman Benchtop Drill Press.  The specs put it in the mid-range of this category.  The stand was built not long after the drill press was purchased.  At that time, I did not include levelers in the design.  So, the levelers here are add-ons.

I knew the chuck was bad.  Replaced it with new and a new Morse Taper #2 arbor.  Snugged up the quill slide adjustment.  Static TIR at the chuck is 0.004”.  Spinning TIR is about 0.007” (reading between the bounces).  Sweeping the table from the chuck, left to right was 0.030”, back to front was 0.061” I needed some way to level the drill press.

I tried using scissor jacks and found these to be too loose and not repeatable.  A bump to the drill press would make it wobble and it would not return to the same level reading.  Before I went further, I needed to understand the relation of a 0.1 degree reading and linear measurements.

The table here shows the values as slope to degrees.  0.1 degree equates to 0.21 in/ft.  Drilling through a ½” piece of material would result in a 0.001” error from entry to exit.  I need to relate the base, column, table and drill head to get an accurate sense of the drill press.  Levelers. 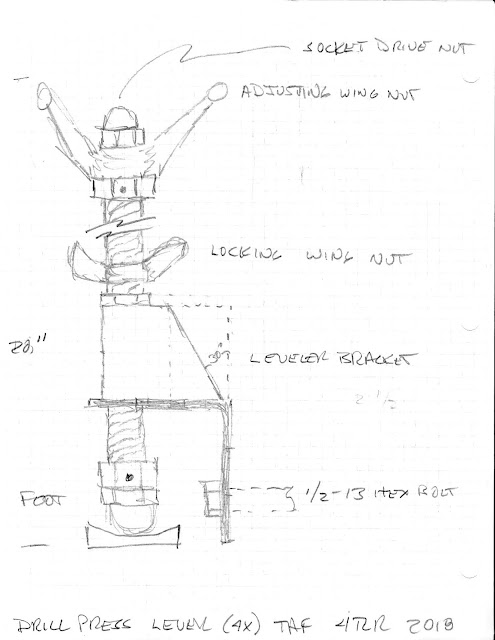 I would not expect anybody to have an exact duplicate of my drill stand.  So, for people pursuing levelers they will need modify the brackets for their application.  The scanned copies of my sketches are rough but should provide enough information to construct your own version.

The holes for the threaded rod to pass through the bracket were cut with a 7/8” bimetal hole saw, and a lot of WD-40.  The holes for the ½” mounting bolts were made with a pilot drill and followed with a step drill to ½”.

Design considerations are: The threaded rod is 18” or half a three-foot section of rod.  The length is primarily to reduce bending over while I am adjusting the levels.  The acorn nut at the bottom are used to reduce friction while adjusting.  The down side is that these concentrate pressure on the floor surface and can cause damage.  I have started with furniture pads and may switch to blocks of wood.  The threaded coupler just above the acorn nut is to stop travel of the rod when it clears the wheel.  The small wing nut tightens up the play in the coupling nut on the bracket.  This does not take much torque.  Finger tight is enough.  Up from there is a plain nut as a stop for the larger wing nut.  Even on the first leveling, I noticed turning the large wing nut 1-2” is about 0.1 degrees.  As it should, ¾”-10tpi rod will move 0.100in per revolution.  Thinking of the large wing nut as a degree selector, ¼ turn equals 0.025”.  So, 1-2” swing should be close to 0.1 degrees.  I found that tightening the small wing nut will throw off the level reading.  Go a little further that you would expect and then tighten the small wing nut.  The acorn nut on top is a finish.  It also can accept a 1-1/8” socket for powered up/down movement.

Sourcing the parts:  ¾”-10 threaded rod, plain nuts and threaded coupling nuts are available at the big box hardware stores.  The ¾”-10 acorn nuts, wing nuts, and large wing nuts can be found at Zoro.com. Also, BoltDepot.com has all the fastener parts except the large wing nuts.  That well maybe I just didn’t ask.  The ¼ by 3-inch square angle steel and 3/16 by 2-inch angle steel can be found at a structural steel supply house or a scrap yard.  Onlinemetals.com can supply short pieces of both sizes if you don’t need/want a 20-foot section.

Leveling is easy with this set up.  Now, I want to see how long it holds.  Also, now I can dig further into the drill press. 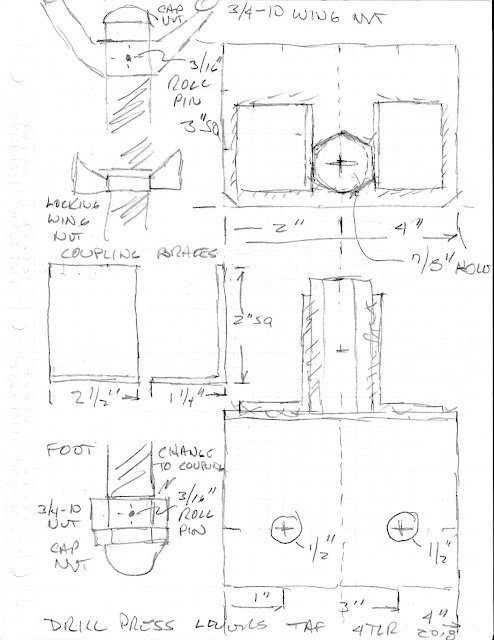 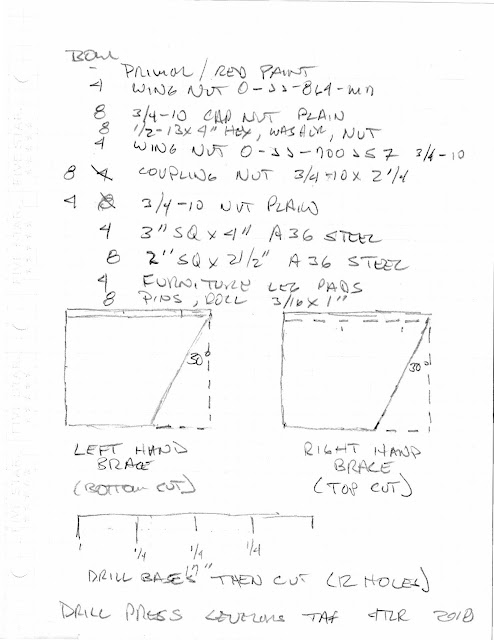 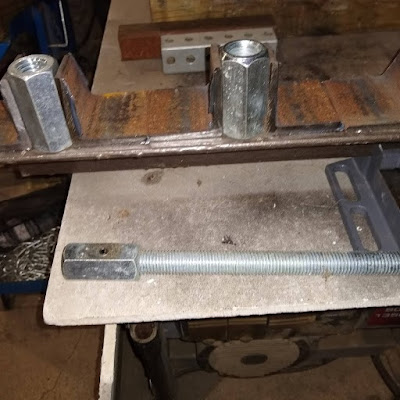 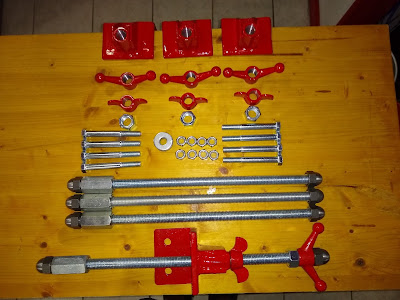